You are here: Home / Alumni in the News / 50th Anniversary Reunion Article 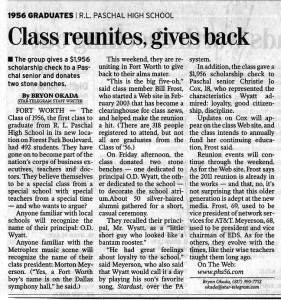 The group gives a $1,956 scholarship check to a Paschal senior and donates two stone benches.

FORT WORTH — The class of 1956, the first class to graduate from R. L. Paschal High School in its new location on Forest Park Boulevard, had 492 students.  They have gone on to become part of the nation’s corps of business executives, teachers and doctors. They believe themselves to be a special class from a special school with special teachers from a special time — and who wants to argue?
Anyone familiar with local schools will recognize the name of their principal: O.D. Wyatt.
Anyone familiar with the Metroplex music scene will recognize the name of their class president: Morton Meyerson. (“Yes, a Fort Worth boy’s name is on the Dallas symphony hall,” he said.)
This weekend, they are reuniting in Fort Worth to give back to their alma mater.
“This is the big five-oh,” said class member Bill Frost, who started a Web site in February 2003 that has become a clearinghouse for class news, and helped make the reunion a hit. (There are 318 people registered to attend, but not all are graduates from the Class of ’56.)
On Friday afternoon, the class donated two stone benches — one dedicated to principal O.D. Wyatt, the other dedicated to the school — to decorate the school atrium. About 50 silver-haired alumni gathered for a short, casual ceremony.
They recalled their principal, Mr. Wyatt, as a “little short guy who looked like a bantam rooster.”
“He had great feelings about loyalty to the school,” said Meyerson, who also said that Wyatt would call it a day by playing his son’s favorite song, Stardust, over the PA system.
In addition, the class gave a $1,956 scholarship check to Paschal senior Christie Jo Cox, 18, who represented the characteristics Wyatt admired: loyalty, good citizenship, discipline.
Updates on Cox will appear on the class Web site, and the class intends to annually fund her continuing education, Frost said.
Reunion events will continue through the weekend. As for the Web site, Frost said the 2011 reunion is already in the works — and that no, it’s not surprising that this older generation is adept at the new media. Frost, 69, used to be vice president of network services for AT&T. Meyerson, 68, used to be president and vice chairman of EDS. As for the others, they evolve with the times, like their wise teachers taught them long ago.
On The Web:
www.phs56.com
______________________
Bryon Okada, (817) 390-7752
okada @star-telegram.com

Note: This article appeared in the Fort Worth Star-Telegram in April, 2006.