You are here: Home / Alumni in the News / Don Whitfill

Don Whitfill, a retired dairyman living in Overton Park, said it was one of those surprising phone calls. Completely out of the blue. 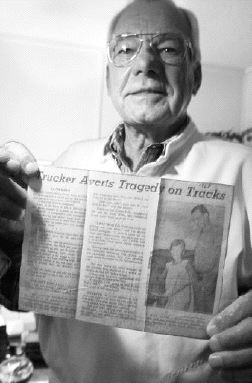 STAR-TELEGRAM/RALPH LAUER
Don Whitfill with a newspaper clipping describing the rescue. “I was hoping I had time,” Whitfill is quoted as saying. “I jumped out and I knew I didn’t have time to explain to her to back off.”

A woman’s voice said, “You might know me and maybe you don’t, but I was the little girl who you saved from the railroad tracks.”

Whitfill, 68, said that sometimes when he stopped for a passing train, he recalled that time 35 years ago when he pulled a little girl from the path of an oncoming train in south Fort Worth.

The rescue was recounted in a story on Page 1 of the Star-Telegram on Aug. 7, 1968. It was the only story on the page not about the Republican National Convention at which the GOP nominated Richard Nixon to run for the White House.

With the story was a photograph of Whitfill and 8-year-old Eileen Walls with her bicycle.

Eileen Walls Bliss, now 43 and living near Burleson, said she had always wanted to track down Whitfill.

“I’ll never forget that day as long as I live. I’m a sentimental person, and I wanted to see that man if he was still alive,” Bliss said.

“When she called, I remembered exactly who she was,” said Whitfill, sitting near Marlene, his wife of 46 years. “It was quite a shock, but I knew I wanted to meet her.”

He did that Friday, when Bliss visited his home and each recounted what happened.

Bliss said she and brother Roy, 12, were playing hooky from their chores at home, 7801 Pebbleford Road, about two blocks away.

She said she and Roy, now a Pentecostal preacher, were not the most obedient children.

“I remember my mama saying, ‘Don’t go out that front door,’ so we went out the window,” Bliss recalled.

After a morning at the Hallmark Park pool, the two were rushing home to get their chores done before their parents got home from work. 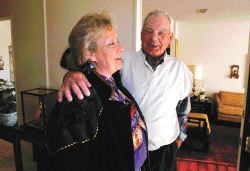 STAR-TELEGRAM/RALPH LAUER
Don Whitfill of Fort Worth gets a visit from Eileen Walls Bliss, whose life he saved at a railroad crossing. “I wanted to see that man if he was still alive,” Bliss said.

They had stopped for an oncoming train, but Bliss, daydreaming as only an 8-year-old can, was practically on the tracks.

Whitfill was in his dairy truck waiting for the train when he glanced over and saw the girl.

In the story, Whitfill said Bliss looked up, saw the train and froze.

Bliss said at the time that she saw the train but didn’t want to let go of her purple and white bicycle, her pride and joy. It had been a birthday present a few months before.

“The next thing I knew, I was running,” Whitfill was quoted as saying. “I was hoping I had time. I was thinking I have three children at home myself.

“I jumped out and I knew I didn’t have time to explain to her to back off. I just grabbed her and the bicycle and we kept going across the track.

“The train was coming full throttle and as soon as we hit the borrow ditch, the train was there.”

Whitfill said he later learned that a witness called the Star-Telegram, which sent a reporter and photographer.

“My mama and daddy first found out about it when they opened the paper the next day. It was not good,” Bliss said.

She said that her family moved to Plainview in 1973 and that she later lived in Lubbock for many years. She moved back to the Fort Worth area a few years ago and now works for an estate-planning company.

“I’ve driven across those tracks many times since, and I always think about what happened,” she said.

A few weeks ago, she and a friend found Whitfill’s address and phone number on the Internet.

“If it weren’t for him, I wouldn’t be alive today,” Bliss said. “I just wanted to call him and thank him as an adult.”

Whitfill thanked her and said he was glad he had been there to save her.