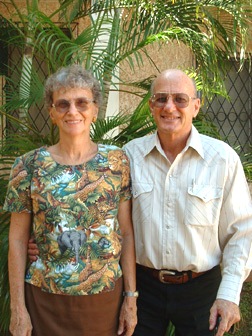 I’m worn out gettin’ here on a bad leg. We’re holed up in a camp a little south of Timbuktu. (I’m tellin’ you this ’cause I knew you wouldn’t want to hear all the good stuff.)

After a little college in Santa Barbara, CA, and a degree from Texas Tech., I found Patsy Walker, the love of my life, in Canton, TX, where I was doing County Agent work. We had two girls, Laura and Julie, and went to work on some big ranches in New Mexico and west Texas.

There, God touched me for the gospel ministry. We started over at the Baptist Seminary in Fort Worth. I was pastor in Cortez, CO, and Granite City, Ill. God called further afield to mission work in Africa. After language school in France we have been in Burkina Faso and Togo for nearly 30 years. We left behind us the grave of our first daughter and 160 new churches. The light hasn’t gone out yet.

Four languages later, I’ve still not learned how to talk. I’m reminded of the time back in the old Paschal building when a teacher told me she would pass me in Spanish I if I wouldn’t take Spanish II. I’ve ridden a Honda bike, which I use for my work, the distance of 10 times around the world. In my old age I’ve begun writing poetry and composing songs. Life has been all I hoped. I give credit to the Lord. I remember my classmates with a great fondness.