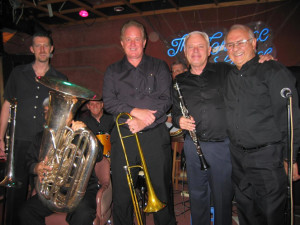 Joe has been playing jazz clarinet since the 9th grade . (54 years ago) He played with many groups in the Fort Worth , Dallas area where he grew up.  He had his own jazz band while at Reed College in Portland. He graduated from TCU with a double major (physics/math) in 1962 and immediately joined IBM. He held a variety of management positions in both marketing and software development. While with IBM he lived in Houston, Los Angeles, Salt Lake City, Amsterdam, Morgan Hill, CA and Hollister, CA. He retired in 1993. . He continued to play jazz while employed by IBM. He worked with the Churchill Street Jazz Band in Northern California for ten years (1980’s) and played most of the Jazz Festivals on the west coast. After moving to Arizona in 1990 he immediately began to play jazz in the Phoenix area. He was a member of the Desert City Six for 13 years. In the last 10 years he has also played with the Off the Wall Over the Hill Gang, Dr. Sasparilla and his Red Hot Jazz Band, Cell Block Seven from Lodi, California and the BoonDockers from Sacramento. He currently leads three bands of his own: The Joe Hopkins Quartet which plays in Scottsdale every Sunday evening. He also leads the 52nd Street Jazz Band which plays Chicago/New York Style Jazz ala Eddie Condon groups. In addition Joe leads the Moldy Fig Jazz Band which plays authentic New Orleans style Dixieland.  Joe is currently Vice-President of the AZ Classic Jazz Society. He has been married to Donna for 32 years and has 8 children (3 from a previous marriage to Martha) He has 5 grandchildren ages 6 to 21. Joe can be reached at acjspres@aol.com
www.azclassicjazz.org