You are here: Home / Nostalgia / I Remember When / Last day at the old Paschal

Into Newer Structure in Fall

Paschal, Having Schooled Many, Folds Its Pennant and Moves On

They’ll go into desk-bare classrooms Friday morning, walk out with report cards, someone will lock the doors and that’ll be all of Paschal High School in the 1000 block of W. Cannon.

The Building becomes Technical High School in September, a fact that probably stirs more emotions in the 18,151 graduates of Paschal than it does in the present student body.

The South Side has grown away from Paschal in the past years. And like a spurned lover, the school is rushing back in September, wooing the area with a face-lifting: a building costing more than $1,500,000 on the site of former McLean Junior High.

The more observant who walk out Friday may notice that “Fort Worth High School” still is engraved over the entrances–just the way it was that September morning in 1918 when the doors of the brick building were first opened.

No one changed it officially in the 1920s when the building became Central High School, or in 1935 when it was named after its former principal, R. L. Paschal.

The Paschal students whose parents didn’t attend school in that building are the exception, not the rule, these days. The building has produced city leaders–doctors, lawyers, judges, public officials.

A Star-Telegram reporter who marched across the stage with the other sophomores 11 years ago (a tradition no longer carried on, incidentally) went back to the building this week to see what the students and faculty thought of the move.

…although new machine shops for Tech have been built over what little ground space remained.

The hall clocks still weren’t keeping correct time. Piles of boxes are growing in empty classrooms. Busts of Sam Houston and portraits of George Washington repose in storage spaces. Athletic gear is being packed away. And back in the musty recesses of a closet they even found a lunch left by a teacher an estimated 15 years ago.

“What’ll I miss most about this building?” mused O. D. Wyatt, who became principal in 1940.

“I guess it would be the wide halls, but, you know, the building doesn’t make a school. It’s spirit. We’ll carry the spirit and the Paschal honor system right over into the new school.”

Wyatt surveyed his office, full of athletic trophies that covered everything from district football champs to state basketball champs.

“The year that turned the tide was 1944,”  he recalled. We hadn’t won a football championship since 1933. Those were the days.”

What’s his most vivid memory of an event in the school?

“In 1940 when I left 30 Paschal boys to guard a football bonfire that we were going to touch off after dark. Four Poly  High boys came over the fence to set it off and my boys scattered.

I got rid of the Poly boys, then called an assembly. I told my boys I never wanted to see them run again. After that we ruled our side of town.”

Miss Lucille Coffman sat alone grading English papers in her room. She didn’t have much to pack, because experience has taught her to travel light.

Is she sad about leaving?

Not really, she said. Teachers as a rule don’t attach sentiment to their classroom. But she’ll insist on taking her own desk.

The students’ desks have been moved out to be refinished. The furniture will go to the new school minus the chewing gum and carved initials of yesterdays.

Some students don’t like the move, feeling they want to finish high school in the building in which they started.

Gail Peterson, Chuck Fielder and David L. Clark, all stopped at random, relish the idea of a modern school.

Juanita Russell said she didn’t mind where the school was– “Just so it’s Paschal.”

Bill Hudson, Bob Gillett, Marvin Brown and Dick Morris, all members of the 1955 graduating class, are a little disappointed. Homecoming to a school they’ve never attended is something they don’t like.

Margie Massengale, a sophomore, gave the soph’s point of view: “Next year we’ll all be lost together. No one will know where classes are.”

but perhaps a message, neatly printed but unsigned on the blackboard of a vacant classroom, summed up the attitude best.

The unknown author had written: “The spirit of old Paschal will live on and on. We love you, Paschal.” 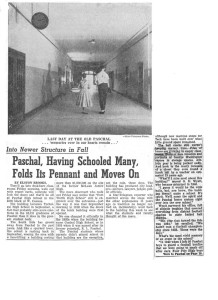 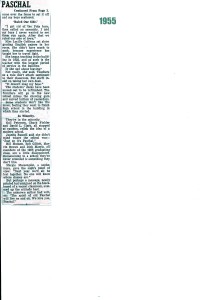