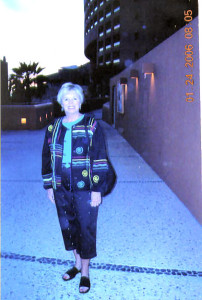 Born in Tulsa, Oklahoma, I moved in the eighth grade with my family to Ft. Worth.  We lived in a new house (then) at 3544 Parkridge Blvd. off of Blue Bonnet Circle.  Among the first persons I met at McLean were June Nelson, Carole Stow, and Mary Tinkle.  We still correspond at Christmas.  In the middle of senior year, my father was transferred back to Tulsa.  Being a typical teenager, I thought this was the end of my world.  I came back to go through graduation at Paschal, however, so, probably, most people didn’t know I wasn’t there.

In the fall of 1956 I started at North Texas and soon met my future husband, David Charles (A.K.A. “Bubba” at the time) Rippy from Sulphur Springs.  We were married at the end of our sophomore year in Tulsa.  Mary Tinkle was my maid of honor and Bill Eschenbrenner was an usher (he and Dave were in KA at North Texas).  Dave and I will be married 48 years in May.

We have five children: twin sons born in 1959 (we were expecting one until the second was born); a daughter in 1961; and sons born in 1965 and 1967–yes, five under eight.  In the first eighteen years of our marriage, because of Dave’s promotions with Sun Oil, we lived in eight cities:  Tulsa; Terre Haute, Indiana; again, Tulsa; Des Moines and Waterloo, Iowa; Chesterfield, Mo.; Pittsburgh, Pa.; and, Malvern, Pa., 35 miles west of Philadelphia.

While living in Pittsburgh, I had started back to college at Duquesne University, changing my major from Business to a degree in Nursing.  (And, no, I had not always wanted to be a nurse since I was little.)   So, at age 35 in 1973, I was trying to learn to concentrate again and taking chemistry and microbiology, etc., for the first time and wearing bellbottoms and driving a Volkswagen bus.  All with 5 kids at home and a husband who traveled.  Of course, when I was in my junior year, Dave was transferred to the main headquarters in Philadelphia.  I applied to the University of Pennsylvania and graduated with a B.S in Nursing at age 40.  It was also our 20th anniversary and Dave had a huge surprise party to celebrate.  Friends from all the places we’d lived came and neighbors, family, and even some of my 22-year-old classmates from Penn.

I worked as a med-surg nurse from 1979 until 1984.  One of our twin sons had graduated from Texas A&M and worked in Houston.  He had moved back to Malvern for a new job two weeks before he was in a car accident (they hit a deer).  He was a front seat passenger and, as a result, was left C4,5 quadriplegic, and paralyzed from the neck down.  He has been incredible.  With his degree in Economics and Finance and some grad-level courses he has had a very successful career in asset management.  Currently, he is an Investment Manager for The Vanguard Group.  He needs assistance with all “activities of living” from caregivers, uses a mouthstick for the computer, and has a battery-powered, computer-driven, “sip and puff” wheelchair.  He is driven in his van to work every day and lives on his own now.  He will take his last test (verbally) this summer to become a Certified Financial Planner.

We are very fortunate in so many ways.  All of our kids graduated from college.  They all live within 45 minutes of us in PA.  Three are married and we have five grandchildren:  twin boys (17); a grandson (9); a granddaughter (6); and a grandson (5).

Dave retired in 1995.  During his career, we had the opportunity to travel internationally, mostly to Europe and Asia, and continue to travel frequently.  We spend Jan-May in Jupiter, FL, and the summer months at the beach in NJ.  We have many interests, but nothing unusual or exotic.  I have enjoyed very much reading the biographies on the web site.  Our class certainly had a lot of creative and intelligent people in it!  Since 1959 I have been back to Ft. Worth just twice–for the 20th and 30th reunions–and am not going to be at the 50th since we are packing to leave FL the first week of May.  I know everyone will have a great time.  Thanks to everyone who planned it and kept us up-to-date on plans.  I hope to continue reading about the news on the website–it is very well done.  (Thanks, Bill Ralston!)