You are here: Home / Nostalgia / I Remember When / Scotty and Doug

Gotta’ tell you another track tale:  Scotty and Doug were our quick guys. At a meet we were running at Farrington Field one sunny day (seems like most of our meets were in rain), Scotty was running in a sprint heat and was way out in front when he started screaming to Coach McCauley “I can’t see, I can’t see Coach!” Coach yelled back “Open your eyes Scotty; open your eyes!” Scotty had tensed up so much he had clinched his eyes shut while blowing down the track.

Doug, like his older brother Robert was trained by his Dad while growing up and kinda’ put more stock in Dad’s regime than Coach’s but it was hard to argue with success. Well back at George Clarke elementary he was the fastest guy. Fact is he was so fast he could gallop instead of run and that was how he ran until…I don’t know. Anyway by PHS days he sprinted.

BUT back then there was one person at George Clarke who could push. Doug so he would sprint but that’s another story for another time.

This is a warning: If you don’t start sending stuff into our web site I will
begin to tell some stories about you and I may have to embarrass you…….Mike Tripp 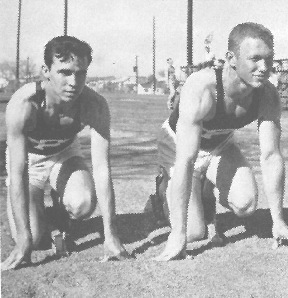